We reached a major milestone in February of 2009 when we purchased the Phinney Neighborhood Center site and buildings, which our organization has leased since 1981. Now that the purchase has been finalized, we launched a large scale effort to completely renovate the two buildings and redevelop the site to better serve our community.

In order to create a modern community center which is not only functional but also serves as a model for sustainability and ecological self-sufficiency, we have embraced one of the most comprehensive environmental challenges – the Living Building and Site Challenge. By doing so, the Phinney Neighborhood Center became the first project in Washington State to take on this challenge.

As of August, the first project is already underway. The roof of the PNA brick building (lower building on Dayton Ave) is being rebuilt in a sustainable way. Over 90% of the original slate will be re-used and each tile will be re-installed with new copper nails.

Bill Fenimore, our Facilities Director, reported today at the Site Committee meeting that progress on the slate roof renovation is well underway despite the inclement weather, with the north gable end and now part of the west side being re-installed by the contractors, who Bill says are beginning to refer to it as 'their roof.' Here's a picture taken from the top floor of the Blue Building earlier today. 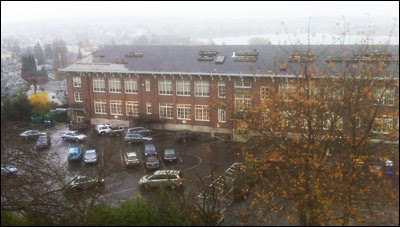