Posted by PNA at 1:34 PM No comments: Links to this post 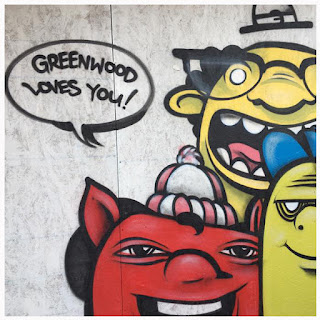 In March, when a gas explosion rocked Greenwood, buildings shook and windows were shattered. The community exemplified strength, compassion and the power of people coming together. Plywood went up where windows once were. And soon these sheets of plywood became canvases. Canvases where graffiti writers and street artists created visual statements of support. As color exited cans, something dull and grim and became bright and beautiful.

Graffiti—and its many mutations, now often called street art—is one of the four elements of hip hop culture.

Now held in high esteem, showcased in museums and fetching million dollars price tags at auctions houses, graffiti was not always welcome. In the mid-to- late 1970's a battle waged between the NYC subway system and graffiti writers.

Without the aerosol art that fleetingly transformed the trains of New York City, there would be no street art as we know it today, no bidding wars over a Banksy. And the blank sheets of plywood that temporarily mended business windows, would have been simply that. Instead, we witnessed a vivid visual expression that blossomed as part of a larger youth movement called hip hop. 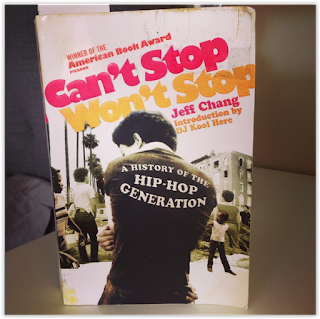 What is hip hop? Why does it matter? Hip hop is a vibrant culture that came to life in New York City in the 1970's, and is comprised of four elements—DJs (disc jockeys), MCs (rappers) and B-Boys (breakdancers) and Graffiti Writers (street artists).

MCs honed skills, rhymed effortlessly, verbally dazzled, and spoke from and for the streets of New York, America and beyond.

Now embedded in popular culture, hip hop is part of our everyday. Hip hop is a great American art form, which is precisely what makes it an infinitely interesting subject for sociological examination and discussion.

Treat yourself to a greater understanding of hip hop culture. During a five week, intergenerational course, embark on a deeper examination of the elements of this great American art form.

The mighty Mos Def, now known as Yasiin Bey, is one of the most underrated and under appreciated MCs of recent times. I know my man, Payton Carter would completely agree. If you're looking to get to know a master of the craft, and have your mind blown in the the meantime, check out "Mathematics" from his Black on Both Sides album. And then listen to it ten more times. It's all mathematics.....
A photo posted by Spyridon "Spin" Nicon (@comprehendinghiphop) on Aug 23, 2016 at 8:58pm PDT