The Phinney Neighborhood Preschool Co-op is hosting an open house on Sunday, February 13 from 1:00 to 3:00pm for the 2011-2012 Pre-K class.  Interested families can meet teacher Sally Watkins, tour the Dragon Room, and learn more about the PNPC.

The Open House will be held in the Pre-K classroom (called the "Dragon Room") on the lower level of the PNA Brick Building.  Children are welcome.  For more information, email pnpc_info@yahoo.com.
Posted by dcarnegie at 4:09 PM No comments: Links to this post 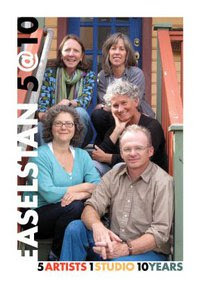 Easelstan Studios has been a busy hub of art-making for ten years. To celebrate, the five most recent Easelstan artists will put on an art show at the Phinney Center Gallery. The show will be up February 2-25.

The opening reception will be held February 11th from 7:00-9:00 pm. We hope that you can join us.
Posted by Pamela at 8:32 PM No comments: Links to this post

Since a great article in the Seattle Times, we’ve received lots of requests to see the Mini-B, and we have to clean the windows regularly because so many people are trying to take a peak. If you missed the event on Saturday (what an event! Over 200 people came), here’s your next chances to get inside.

*Open Houses: Visit the house anytime between 1pm-4pm to see the house and talk with a Passive House expert.
*Public Tours: Check-in at reception in the Blue Building at the time of the tour.

If you know a student or professional group that would like a private tour, please contact:
Jill Eikenhorst
jille@phinneycenter.org
206-783-2244

Posted by Pamela at 12:57 PM No comments: Links to this post

Cultural Movie Events at the PNA

Movie Screening and Discussion: “The House We Live In” of the PBS series "Race: The Power of an Illusion."

In honor of Black History Month, the PNA will host a screening of “The House We Live In,” an episode from the PBS documentary series "Race: The Power of an Illusion." The one hour film will be followed by a facilitated discussion.

This will be the first in a series of monthly movie events between now and the end of June, hosted by the Cultural Engagement Workgroup at the PNA. The film series will explore society’s social institutions and how systems and behaviors perpetuate and reinforce discriminatory practices and inequities. Through screenings and facilitated discussions, the PNA intends to build a comfortable community space for education and thought – initiating conversations about important social topics. Members are encouraged to join us on that journey.

This series of films and discussions is also timely in view of the soon to be released 2010 Census data, which will further illustrate that the USA is becoming increasingly diverse. In the past, Census projections have stated that by the year 2050, there will be no minorities or majority race in the United States.

“One of the PNA's goals is to engage the community in meaningful conversations that build bridges of understanding and appreciation of differences,” says Executive Director, Lee Harper. “This movie series also gives all of us the opportunity to explore our feelings and perceptions about race, culture and social justice issues.”

In the fall of 2010, the PNA formed a staff-led workgroup called the Cultural Engagement Workgroup (CEW), with the goals of developing a long-term cultural engagement strategy here at the PNA. Members are encouraged to participate in CEW programs with the goal of increasing awareness and appreciation of similarities and differences in our community, which, in turn, will enable neighbors and staff to develop ways to work toward increasing equity and racial and social justice.

More information about the film can be found at http://www.pbs.org/race/000_General/000_00-Home.htm. For more information about the screening, contact Executive Director, Lee Harper, at leeh@phinneycenter.org or 206-783-2244, or call Marketing Director, Alex Eckardt, at alex@phinneycenter.org or 206-783-2244.
Posted by Alex Eckardt at 9:27 AM No comments: Links to this post