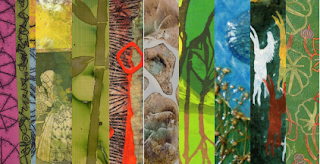 Esprit de Print will be open at the Phinney Center Gallery on January 4th. The opening reception will be held Friday, January 13th from 7:00-9:00 pm.
Come meet the artists!

Esprit de Print is a group show of original prints by one of Seattle Print Arts art salons. Each of the nine members has a unique artistic voice. They meet monthly to share information on printmaking techniques and discuss their work. This show hopes to demystify the art of printmaking as it celebrates the diversity of original works on paper.
Posted by Pamela at 12:47 PM No comments: Links to this post 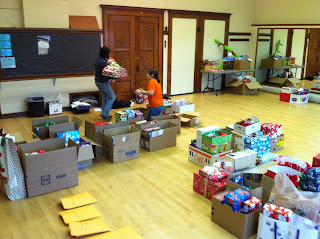 And it turns out you are much more than nice!

The 18th annual Phinney Neighbors in Action Giving Tree was another awe-inspiring, shining light of hope during this dark time of year.

Skateboards, puzzles, basketballs, stuffed animals, warm clothes, and gift cards. Just a few examples of the 300-plus surprises you wrapped up and delivered for people in need served by our partnering agencies. More than the tangible gifts, the spirit of generosity and goodwill you shared were deeply touching to all of us.

Many, many thanks to everyone who contributed to the Giving Tree!

Happy holidays!
Posted by Ali Saperstein at 3:14 PM No comments: Links to this post

We started as the ugly duckling. One of only two homebrewers invited to the Phinney Neighborhood Association Beer Taste in November 2010 (Beer Trek), we sheepishly prepared our meager set up next to the likes of Sierra Nevada, Ninkasi, and many other breweries we’ve known and loved for years. As the doors opened the very eager beer lovers made the rounds to select which beers would merit their ten precious beer tickets… and when they asked where we were located, we had to work on a response that sounded better than “our garage.” We were a completely unknown brewery called Reuben’s Brews, named after our son. Despite their trepidation some surrendered a ticket, and more importantly they liked what they tasted, our Roasted Rye PA. Word spread, the tipping point was reached, and we left as swans that evening, the recipients of the People’s Choice Award.

Flash forward one year, and we felt a little akin to Cinderella, left behind as her stepsisters (neither ugly nor evil in this case) were whisked away to enjoy the ball. A change in the policy meant that homebrewers were no longer invited to pour at the PNA Beer Taste, so we were enjoying the event from the other side, as eager beer lovers. It was, as always, a magnificent event where beer enthusiasts—from the aficionados to the recreational lovers—are invited to sample a wide variety of the region’s best beers. Luckily our fairy godmother, Anacortes Brewery, helped us get to the ball. After we won Best of Show at the Skagit County Fair, Anacortes invited Adam to brew his recipe on their equipment, and the result was an American Brown Rye, a cousin of sorts to the Roasted Rye PA that Reuben’s Brews poured the year before. The rye adds a unique twist and crisp finish when combined with specialty British malts. It just so happened that the batch was ready in time for this year’s PNA Beer Taste, and what an amazing bonus that our recipe, the Anacortes Brewery’s America Brown Rye, won the People’s Choice Award! That makes the second year in a row that our beer won, a proper fairy tale ending for a magical night!

What started as a labour of love on a small system in our garage has burgeoned into an award-winning brewery. We always enjoyed the fruits of our own labour, and we never had trouble finding willing drinkers among our friends and family. Once we started receiving recognition at competitions, we decided to turn our obsession into our profession. We love crafting brilliantly tasty artisan ales, and as long as people love drinking them, we are committed to making them available. Look forward to a new Reuben’s Brews taproom—not in our garage—opening in summer 2012.

Read more about our brews and our story at www.reubensbrews.com .
Posted by Unknown at 3:35 PM No comments: Links to this post

We are seeking donations of cooked hams, pies, and shelf-stable juice for our special holiday lunch next Wednesday, December 21. Call 783-2244 to sign up and make delivery arrangements.

We would also appreciate donations of ground beef to keep on hand for weeks when our delivery from Food Lifeline is low on protein.

Questions? Email judith@phinneycenter.org.
Posted by Judith Wood at 12:23 PM No comments: Links to this post