Friday, March 15, you can tune into Q-13 at 8 pm and see the show that Chef Gordon Ramsay made working with the Avgoustiou family at Yanni’s Restaurant, 7455 Greenwood Ave N. Kitchen Nightmares is wild; it’s scary! It’s pretty good television, but what was it like to live it? 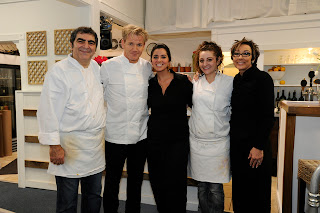 Executive Chef Peter, host Karen and their two daughters have been living and breathing their PhinneyWood icon for 30 years along with Peter’s father Yanni. Crowds waiting for a table outside the door were typical until the “Great Recession” began to wear thin on Seattlites over the past couple of years. Then, as for several great restaurants in PhinneyWood, things got tough.

Even so, when the family first thought about Kitchen Nightmares what they thought was, “Not us!”  They had watched the shows and clips from shows available on the Nightmares website and the drama was high. Gradually, they came to think more about the results. Karen said, “It seemed like a real chance to change things up, to re-energize.” After some serious family discussion, Peter and Karen said, “Yes.”

Late last year, Kitchen Nightmares arrived on Greenwood. “It didn’t take long for the crew to size us up,” Karen noted. “They already expect what they’ll find. Peter was the stubborn one who didn’t want to change. Taryia was the emotional one. Alyse gave as good as she got and I was the calm in the storm.” 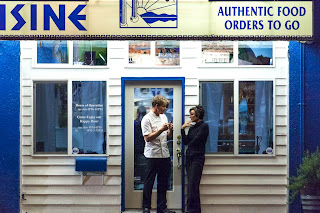 The family was able to set some limits.  The Parthenon and the city of Athens still sit calmly above the bar. They aren’t sure, however, how much in love they are with some details of the new décor. The new menu is brief, by comparison, but the dishes are delicious (taste-tested by the writer) and a word to the wait staff can sometimes bring an old favorite straight to your table  – in newly speedy time.

Was it worth it?  The Avgoustiou family consensus is, yes. “It feels new,” they agreed, “and it gives us new energy. When we bring that to our customers along with great food, we know we did the right thing.”

A Note from Yanni’s Restaurant:
The Avgoustiou family would like to thank their neighbors for putting up with all the unpleasantness that the production brought with it. Kitchen Nightmares contacted us because they were looking for a “credible famous restaurant in Seattle.” Thanks to Yanni’s, once the show airs nationally, everyone will know where Greenwood is, and we should see much more traffic, which will help our neighborhood businesses.
Posted by Alex Eckardt at 12:53 PM