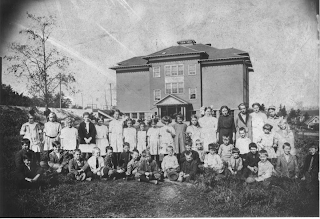 This morning the Governor’s Advisory Council on Historic Preservation and the Washington State Department of Archaeology & Historic Preservation listed the John B. Allen property (better known to our community as the Phinney Neighborhood Center) on the Washington Heritage Register of Historic Places. The Council also recommended that the site be nominated for the National Register of Historic Places. The John B. Allen property is already a Seattle landmark. Board member Rhoda Lawrence championed these efforts over the last five years and came to Olympia with me to accept the certificate.

Interesting History of the Site
The John B. Allen property is significant its association with the Seattle Public School system and expression of shifting educational philosophy as demonstrated by the differences in plan between the two buildings that remain virtually unchanged since their original construction and thus represent two different architectural periods of school design. The buildings show the shift from the simple, easily constructed wood-frame structure, to a new technique of masonry and concrete “fire-proof construction” adopted only 13 years later as a safer construction type. The two buildings reflect the general change in the choice of architectural style for new school buildings, from the Colonial Revival style of the 1904 building to the simplified interpretation of the Italian Renaissance style of the 1918 building.

The pair of buildings clearly contrasts the first model plan of stacked classrooms surrounding a central core to the later preferred linear model arrangement of classrooms allowing for more efficient use of space, easier circulation, and increased access to natural light and ventilation. The differing plans also demonstrate the shift from the general classroom education philosophy to the incorporation of specialty educational functions and assembly spaces, which could provide multi-use facilities to the wider community.

The Seattle School District purchased the subject property for $1,850 in 1902, when it was an unplotted three-acre site, in order to provide a new school for the growing neighborhood. Prior to that time, several children were being taught in the private living room of house on Green Lake Way. The new school, named Park School for its proximity to Woodland Park, was a grouping of three portable buildings that housed 99 students in grades one through seven. The new permanent building constructed in 1904 was named for John Beard Allen, Washington’s first U.S. Senator. A lawyer, J.B. Allen was from Indiana by way of Walla Walla. He was instrumental in the construction of the Naval Ship yard in Bremerton and the development of Fort Lawton and construction of the Lake Washington Ship Canal in Seattle.

The new school was constructed in a way that was intended to allow for expansion as student enrollment increased. When Phinney Avenue was widened in 1911, it reduced the area of the site to the west and placed physical restrictions on the expansion opportunities for the building, and resulted in the wooden structure appearing substantially lower than street level. This changed the physical approach to the building. In 1917, rather than adding to the existing building as demand for classroom space grew, the District chose to construct the “modern” brick building on the lower eastern portion of the site, along Dayton Avenue North, and to join the two buildings by using the large expanse of site in between as play areas with connecting stairways.

Enrollment peaked in 1932-33 at 758 but by 1944, the 1904 structure was noted as having “outlived its usefulness.” Over time, the school’s emphasis shifted to the 1918 brick building, and the older building was closed to regular elementary classes. In 1972, an alternative school—the Allen Free School—was opened in a portable on the site and offered a variety of learning approaches. In 1977, the Allen Free School became the Allen-Orca Alternative School for grades K through 5, and by 1980 had a waiting list of 70. Unfortunately, due to declining traditional student enrollment, decreasing federal funding, and determination that the building would be unsafe in a seismic event, the School District closed the Allen School in early 1981.

It was subsequently leased as a community facility by the Phinney Neighborhood Association, and the Phinney Neighborhood Center was born. PNA was able to purchase the site in 2009 and is currently raising funds to finally make the Blue Building accessible, creating a living enduring space that allows people of all ages and ability to gather and share their lives, ideas and experiences.

Big Bertha
The air-raid siren tower at the northwest corner of the site was one of many installed in Seattle in 1952-53 to warn citizens of incoming Soviet missiles or atomic bombs. During World War II, Seattle installed 63 air raid sirens, most small enough to attach to telephone poles. Placed in storage after the war, all working sirens reappeared in the early 1950s when tensions mounted with the Soviet Union. The City added 21 more, including several enormous sirens mounted on steel towers, after Seattle Mayor William Devin promised “the best air-raid warning system of any city of our size in America.”

Phinney’s “Big Bertha” was installed on April 22, 1953. Chrysler built the five-horsepower, 5,542-pound siren, and the Seattle Department of Engineering put it in place. With her gas-powered engine, Big Bertha could top 130 decibels and be heard over a mile and a half away. Wednesday noon siren tests were conducted until the early 1970s: three minutes of an extremely loud, pulsating, undulating tone, followed by a blast of sound lasting one minute, two minutes of silence, a second one-minute blast, two more minutes of silence, and finally a one-minute blast to mean “all clear.” During the tests, students at the John B. Allen Elementary School were required to curl up under their desks and hold a heavy book over their heads.