Movie Screening and Discussion: "In Sickness and in Wealth" 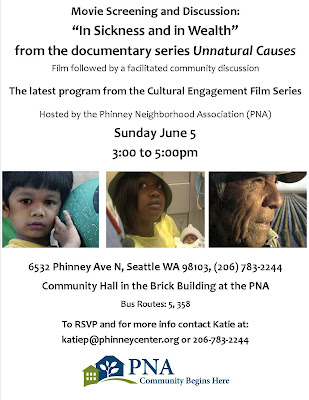 Movie Screening and Discussion:
“In Sickness and in Wealth” of Unnatural Causes, documentary film exploring racial and socioeconomic inequalities in health


The Phinney Neighborhood Association (PNA) will host a screening of the first episode “In Sickness and in Wealth” of the documentary film Unnatural Causes on Sunday, June 5, from 3 pm – 5:00 pm, in Community Hall in the Brick Building at the PNA, 6532 Phinney Ave North, Seattle, 98103. 206-783-2244. Approximately one hour long, the film will be followed by a facilitated discussion. For more information about the Cultural Engagement Film Series, please visit the PNA’s Cultural Engagement webpage by clicking HERE. RSVP to Katie Parker at katiep@phinneycenter.org.

Film Summary
Click HERE for more information.
The PBS documentary series Unnatural Causes investigates the root causes of our alarming socio-economic and racial inequities in health. The series uncovers startling new findings that suggest there is much more to our health than bad habits, health care, or unlucky genes. The social circumstances in which we are born, live, and work can actually get under our skin and disrupt our physiology as much as germs and viruses.

“In Sickness and in Wealth,” the hour-long opening episode, paints the big picture. Set in Louisville, Kentucky, it is a story about health, but it's not about doctors or drugs. It's about why some of us get sicker more often and die sooner in the first place. What are the connections between healthy bodies and healthy bank accounts and skin color? How do social policies and the way we organize work and society affect health? Solutions, the show suggests, lie not in more pills but in more equality. "In Sickness and In Wealth" sets out the series' main themes: that health and longevity are correlated with socio-economic status, that people of color face an additional health burden, and that our health and well-being are tied to policies that promote economic and social justice.

Cultural Engagement Film Series
The Cultural Engagement Film Series presents screenings and discussions with a focus on racial and social justice issues. The film series explores society’s social institutions and how systems and behavior perpetuate and reinforce discriminatory practices and inequities. Through screenings and facilitated discussions, the PNA intends to build a comfortable community space for education and thought – provoking conversations about important social topics.
Posted by Katie Parker at 3:10 PM