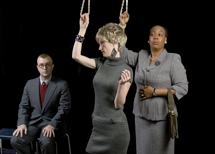 DUE TO DEMAND, TAPROOT THEATRE COMPANY ADDS PERFORMANCE OF THE GREAT DIVORCE

Playing to sold-out houses, Taproot Theatre Company has added a performance of C.S. Lewis’ The Great Divorce on Tuesday, February 16, at 7:30 p.m. Receiving its regional premiere at Taproot Theatre under the direction of Scott Nolte, The Great Divorce has captivated audiences with its fantastical and imaginative story, colorful characters and philosophical ideas.
First produced Off-Broadway in 2007 in an adaptation by George Drance and The Magis Theatre, The Great Divorce brings to life C.S. Lewis’ 1940s allegorical novel. One drizzly afternoon our author embarks on a supernatural voyage with a cast of eccentric, humorous characters that bear a remarkable resemblance to us. Theatrical, imaginative and thought provoking. It’s a bus ride from hell to heaven that, in the grand C.S. Lewis tradition, leaves you breathless and wanting more.
The Great Divorce runs Wednesdays through Saturdays through February 27, plus the added performance on Tuesday, February 16. Tickets are available through Taproot Theatre’s box office at 206-781-9707.
Posted by laura g at 9:07 PM