Behind the Scenes at Tonnemaker Hill Farm

by Dick  Gillett
Business was brisk last Friday at the Phinney Farmers Market, with Rainier cherries piled high on the table at the Tonnemaker Farm stall. 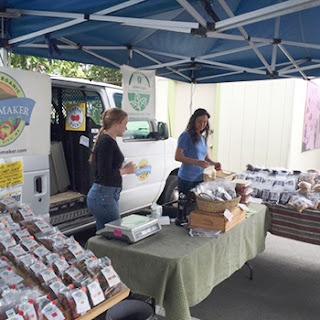 Serving the customers were Kayci and Alana, both from Seattle, but both deeply familiar with operations at the 128 acre farm in Eastern Washington. The farm is big on fruit (including several varieties of cherries, with apricots and peaches coming in early to mid-July) and has 60 acres of orchards. A few of the cherry trees are three generations old and still producing. And speaking of generations: four generations of Tonnemaker farmers have farmed in Eastern Washington.

But fruit isn’t the only product you can find at their booth. In season are veggies from most of the rest of their acreage, including summer squash, tomatoes, rhubarb, zucchini and cucumbers. Friday one table featured a variety of packaged organic peppers. “Our crops are rotated annually for soil preservation and also keep pests to a minimum," said Kayci.

But who actually picks the cherries off the trees and the peppers from the plants? Amazingly, Tonnemakers are involved. Writes a member of the farm team: "Our current harvest crew consists of 2 generations of Tonnemakers, a couple of local long time year-round employees, local high school and college students on summer break, Japanese Agricultural Exchange Trainees and a seasonally variable number of members of 3 Hispanic families, several of which have helped with the short but intense cherry harvest for more than 20 years. Everyone here from the top down is a picker of one crop or another. 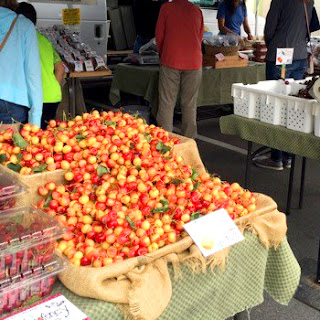 "Hand harvesting crops is hard work and everyone here participates - even 80 year old Gene Tonnemaker insisted on donning a picking bag and pitching in.” Whew!

But  happily for us customers at Phinney Farmers Market, “Life is just a bowl of cherries.”
Posted by PNA at 11:46 AM