Enchanted April Opens at the Taproot 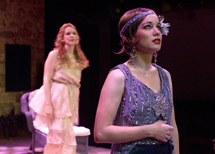 Playing at the Taproot Theater 204 N 85th Street, through October 24.
As the crisp autumn winds blow, and the leaves swirl through the city, Taproot Theater’s current production, Enchanted April, provides theatergoers a welcome dose of spring warmth. Set in post World War I England and Italy, this play not only showcases the strong talent of the performers, but also provides a reflection on the times. Many young men have died in the war, while their loved ones cope with the grief. Women in England have just been granted suffrage, and are beginning to stretch their wings of independence.
Thus begins the story of Lotty Wilton, and optimistic wife of an enterprising young solicitor. Tired of the dreary London rain, which was a very loud sound effect, Lotty comes across an advertisement for an Italian country villa for rent in the month of April. She convinces a reluctant acquaintance from church, Rose Arnott, to join her in this adventure. However, between the two women, they can’t quite afford the rent of the villa. They advertise for two more single ladies to join them and the only two to answer the ad are the upright and uptight Mrs. Graves, and the seemingly carefree socialite Lady Caroline Bramble. Both comedy and touching drama ensue as each of the women is transformed by their travel experiences.
Charity Parenzini, artfully plays the cheerful and sweet Lotty without being overly saccharine. Equally strong is Nikki Visel, as Rose Arnott, who makes a dramatic evolution from a “sad Madonna” to a vivacious wife. Kim Morris, as Mrs. Graves, skillfully embodies a stuffy, yet lonely Englishwoman, and the glamorous Anne Kennedy seems to effortlessly slide into the role as a sullen sophisticate. The men of the company provide the essential glue, filling in the gaps and holding everything together.
Sarah Burch Gordon, has done an exceptional job with costumes for all characters. The fabrics are luxe, the lines of the clothing perfectly reflect the time period and Gordon has a keen attention to detail down to the earrings and shoes. Gin Hammond as the dialect coach, assures that the player’s British accents are consistent and authentic.
One again, The Taproot Theater has brought to the stage a production that inspires and transforms the audience.
For ticket information and details go to www.taproottheater.org
Posted by laura g at 9:45 PM